Martial law refers to the replacement of civil rule by military rule. This may be characterized by curfews, the dispensation of military tribunal rulings on civilians, and the suspension of the privilege of the writ of habeas corpus. The writ of habeas corpus, which in Latin refers to “having the body”, is a citizen’s protection against unlawful imprisonment. This is suspended in times of crisis to expedite justice.

In the Philippine Constitution, the President may exercise his role as Commander-in-Chief of all Philippine armed forces and act accordingly to protect the safety of the Filipino people. In cases of lawless violence, invasion, and rebellion, he may suspend the privilege of the writ of habeas corpus or declare martial law in any part of the nation. To declare martial law is thus a legal course of action the Chief Executive may take. Such a power is granted unto the President for cases where it becomes truly necessary, when the people’s lives are being threatened and these powers facilitate the process of securing their safety.

However, given the immense power that martial law can give the President, the Constitution ensures the implementation of appropriate checks and balances. Power is normally spread across various institutions so that functions can be discharged efficiently and authority is not concentrated in a single entity. In the wrong hands, the declaration of martial law and the suspension of the writ of habeas corpus open up the real possibility of the abuse of civil rights. The balance of power is thus only disrupted under the gravest of circumstances, only as a last resort.

The legislative and judicial branches of government play a central role in protecting against such abuses. By limiting the terms under which martial law may be called for, implemented, and extended, they are mandated to prevent the President from using his powers for anything other than the good of the Filipino people.

The Process of Enacting Martial Law

In today’s 1987 Constitution, established years after Martial Law was lifted, a President is bound by the following provisions in declaring Martial Law. 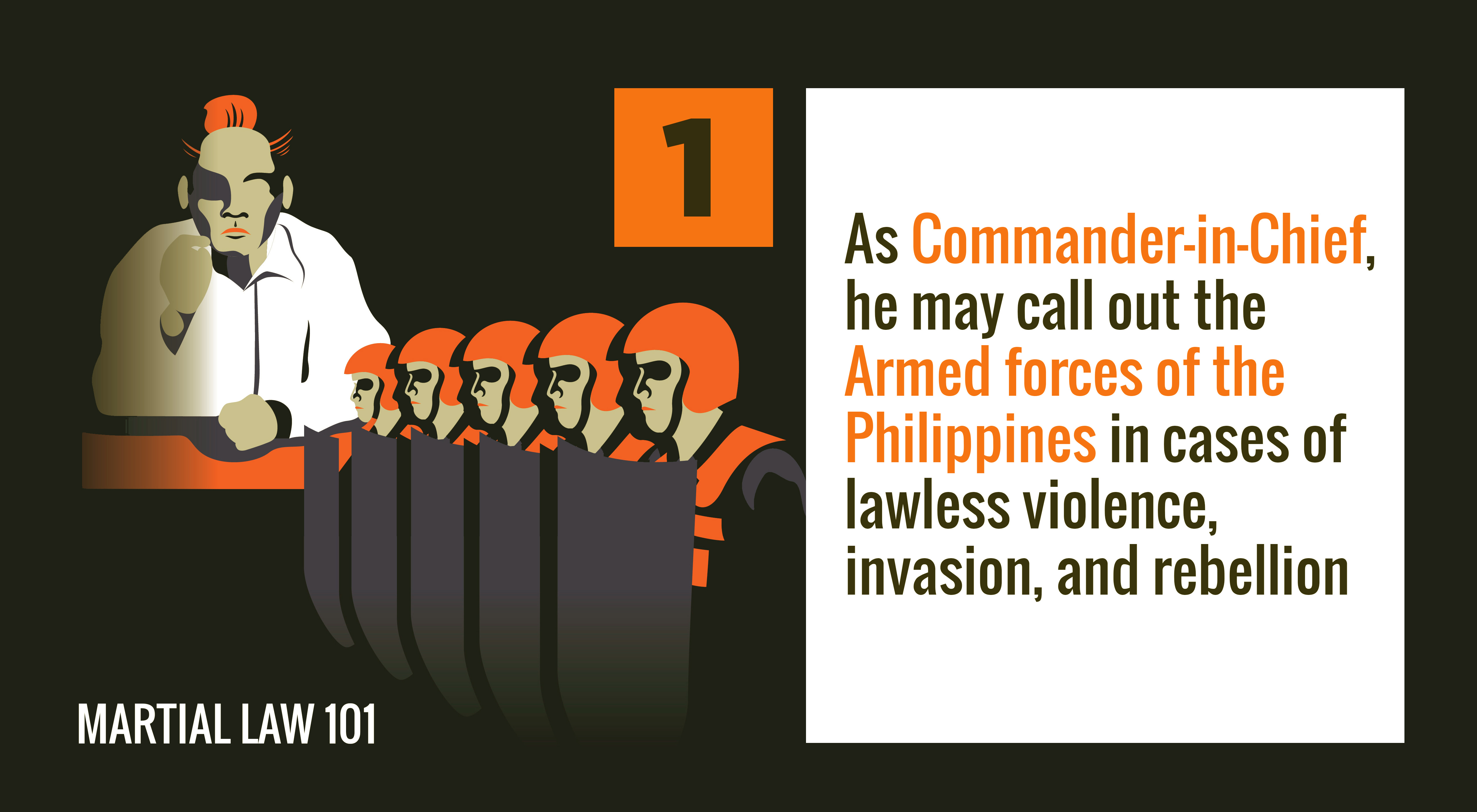 As Commander-in-Chief, he may call out the armed forces of the Philippines in cases of lawless violence, invasion, and rebellion. In case of invasion and rebellion, martial law may be declared in the country or a part of it, and the writ of habeas corpus may be suspended. 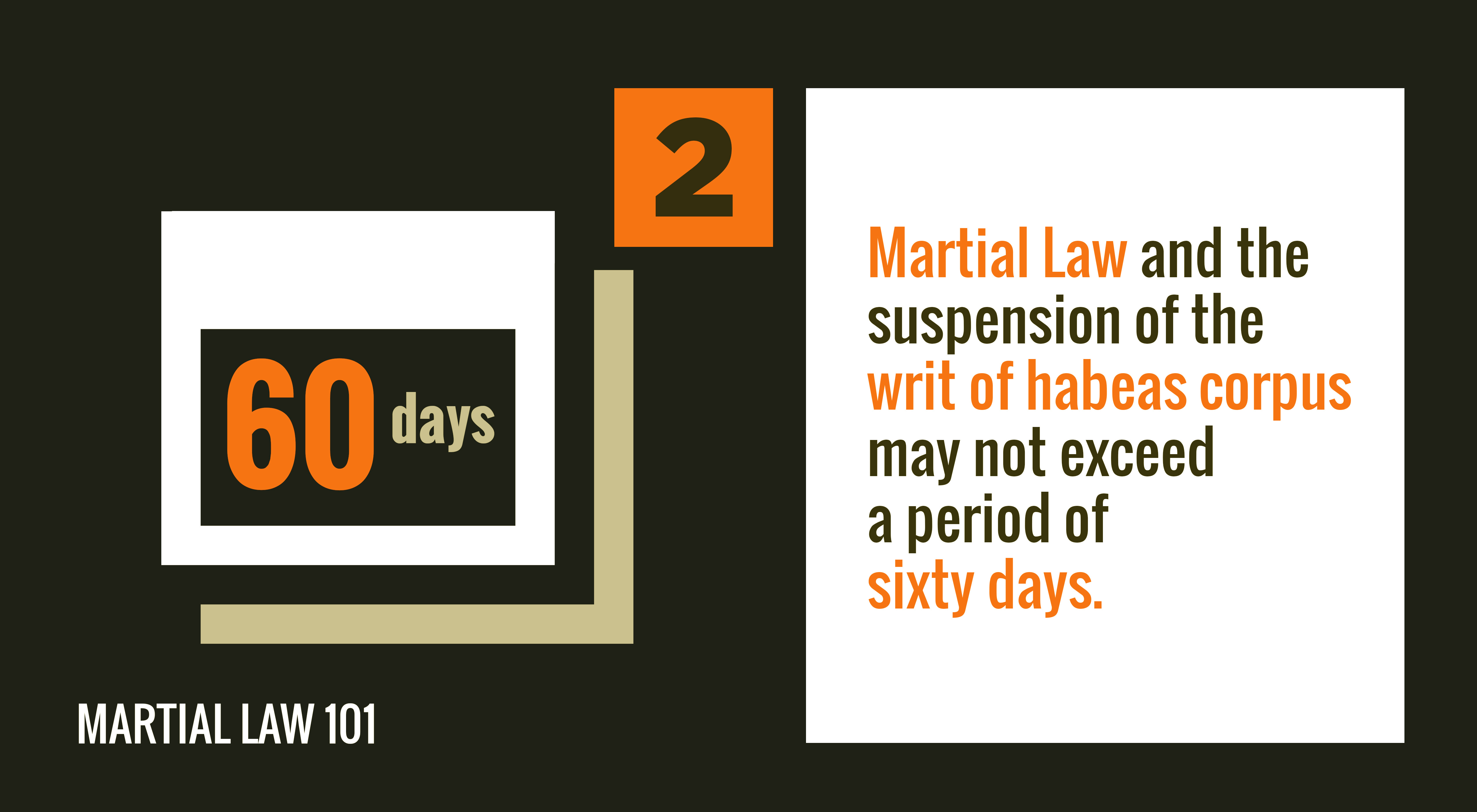 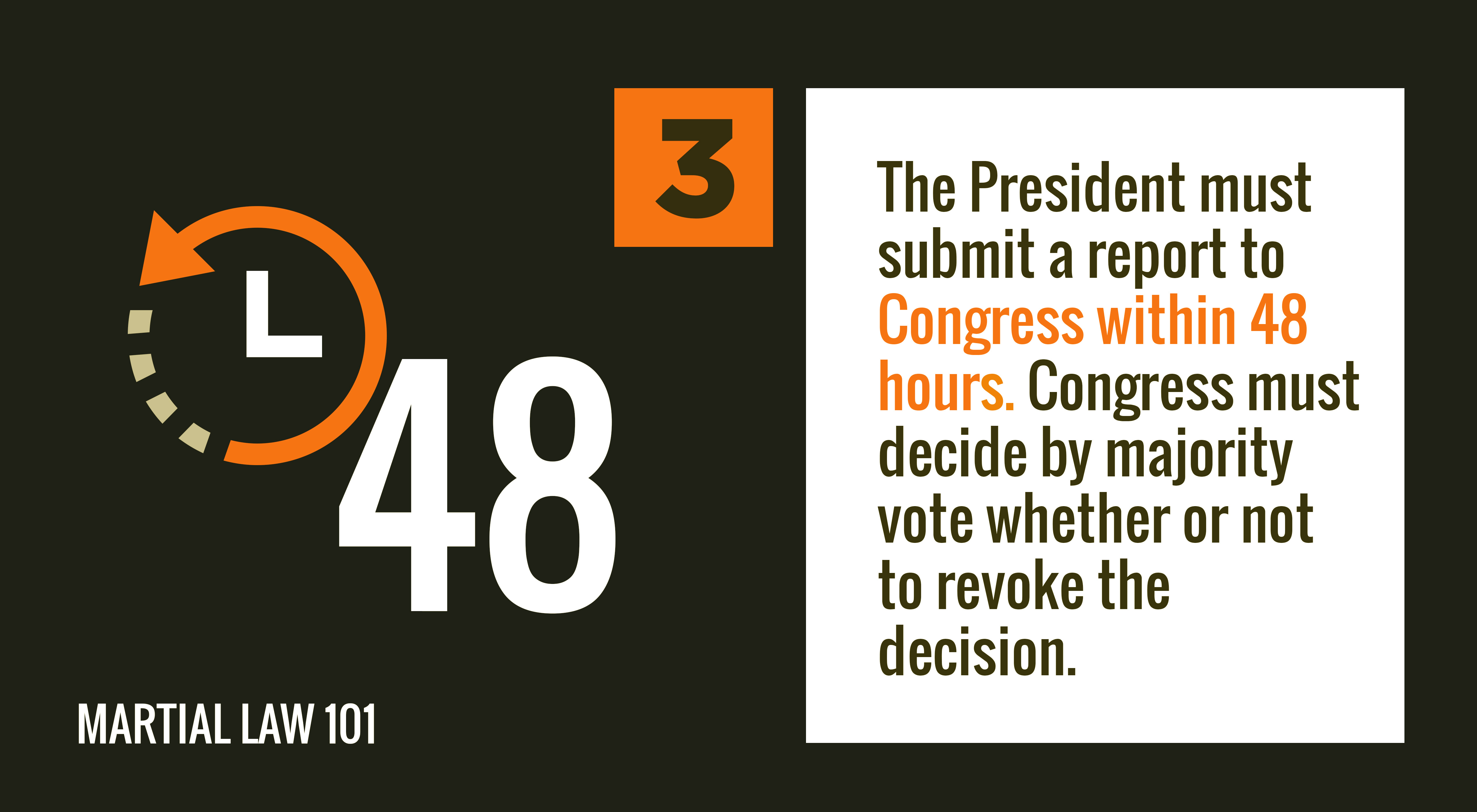 Within forty-eight hours of the declaration, the President must submit a report to Congress. Congress must then vote jointly and decide by majority vote of all its members whether or not to revoke the President’s decision. 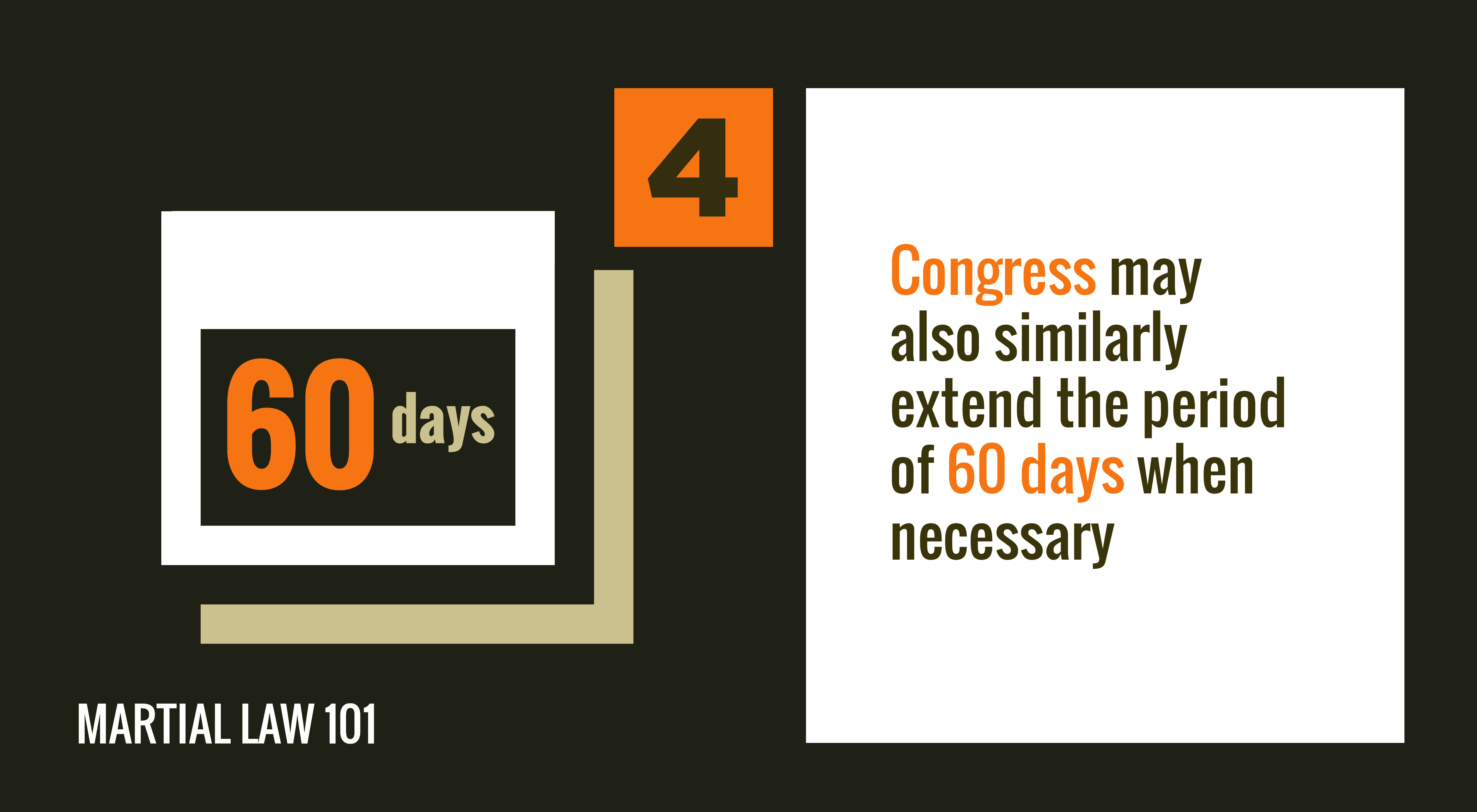 Upon the President’s initiative, Congress may also similarly extend the period of 60 days when necessary. The period of extension is determined by Congress. 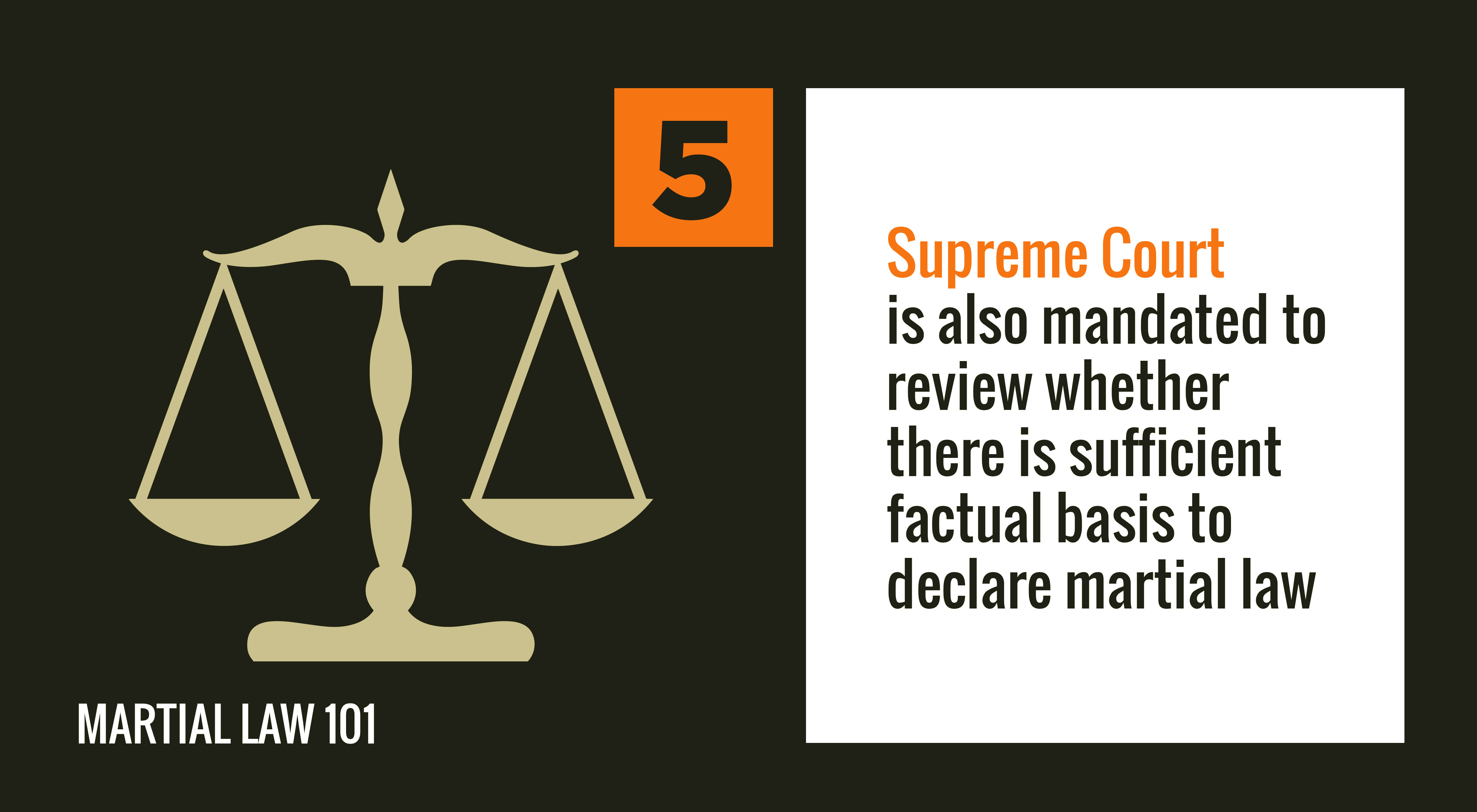 Subject to filing by a citizen, the Supreme Court is also mandated to review whether there is sufficient factual basis to declare martial law. Within 30 days of filing, a decision must be promulgated.

All these measures ensure that the immense power of martial law cannot be abused by the President. With all these checks and balances, martial law can only be declared when there is sufficient factual basis to declare it, as competently reviewed by the Supreme Court. Moreover, additional specifics are laid out to protect citizens from abuse under the suspension of the writ of habeas corpus. Many of these additions reflect lessons directly learned from the period of Martial Law under Marcos.


Warning Signs: The Events Leading Up to Martial Law
We look back at events before the declaration of Martial Law in 1972 that, in retrospect, could have served as signs ...
Declaration of Martial Law
On the night of September 23, 1972, Ferdinand Marcos spoke to the nation by television and by radio to make it known ...
Promises of the New Society
Marcos made many specific promises in order to achieve his dream of the New Society, a vision that represent a great ...
About
MLM Awards
Facebook
Library
Lesson Plans
Calls to Action