Promises of the New Society

In any of President Ferdinand Marcos’s key speeches, he was most inspiring when he would talk about his vision of the New Society, or Bagong Lipunan, in which every individual Filipino could be free to fulfill their potential as human beings.

In such a society, no longer would Filipinos live in poverty, hunger, corruption, mass deception, and violence. After centuries of colonial oppression, Marcos would declare in his speeches, it was time for Filipinos to finally live in a way that was worthy of their dignity.

In his declaration of Martial Law, Marcos made many specific promises in order to achieve his dream of the New Society. A brilliant statesman and orator by many accounts, his vision represented a great aspiration for the Filipino people to enjoy happy and fulfilling lives. 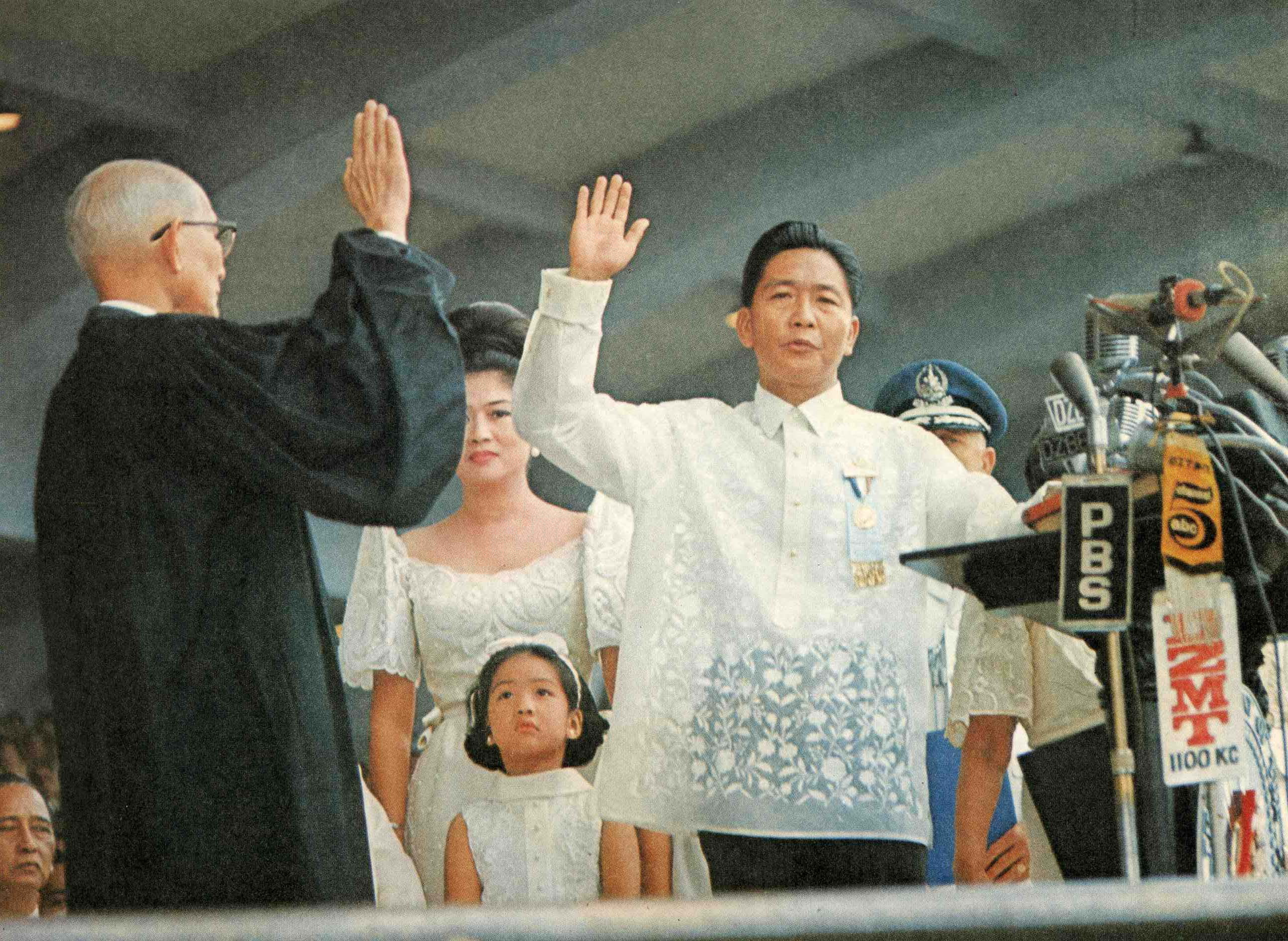 In many of Marcos’s speeches as President, he declared that central to his mission for the New Society was to make it a revolution of the poor, aimed at protecting the helpless of Philippine society and ending the inequality that had kept the nation from truly pursuing inclusive growth.

Marcos condemned a society based on privilege. He condemned the suffering that privilege and inequality caused the Filipino people, the unjust anguish of millions at the expense of the few. In an essay called “The Radicalization of Society”, Marcos declared that:

We envision, therefore, a new society in which equality of opportunity is not a fraud but a fact . . . This simply means that a few should not be born “with everything” while the many have nothing.

Thus, Marcos promised a Philippines in which true equality of opportunity could be attained. By striking at the roots of the Philippine social, political, and economic order, Marcos dreamed of a New Society in which every Filipino, whom he asserted to be equal in rights and in dignity, was born into a world which allowed him to live out this profound truth.

In a speech delivered with the World Health Organization in 1968, Marcos emphasized the importance of increasing food production in the country, in order to sustain the Filipino people’s basic need for nutrition. He was aware of the troubling fact that despite the huge potential of Philippine land to produce agricultural resources, millions remained hungry and malnourished.

More than satisfying the local need, however, Marcos set forth an even more ambitious goal: not only would the country be producing enough crops to feed the people, the Philippines would even become an exporter to other nations.

Beyond this, Marcos dreamed of a Philippines in which farmers—directly responsible for producing majority of local food resources—would be in direct control of their means of production. This entailed opening up vast opportunities for education and redistributing the land so they stood to benefit most from their own hard work. Said Marcos, in a speech to the World Health Organization in 1968:

I envisage that in the not too distant future our workers in the field of nutrition will be confronted with the problem of how to utilize scientifically and effectively the foodstuff already available rather than in worrying as to when and where the essential food elements will be secured.

Even in his very first State of the Nation Address in 1966, Marcos was direct about his promise to reform government in order to eliminate corruption, which he viewed as one of the worst impediments to national growth. He said:

Our administrative machinery must be regenerated to gear it to the requirements of national growth. Graft and corruption in our government must be exposed and eliminated.

To this end, Marcos recognized that the political climate in the country had to be struck at the roots. No longer should the same elite families be awarded power by virtue of their blood or their connections. Moreover, he envisioned swift recompense for those in power who only aimed to abuse it. The Filipino people would have justice, no matter what one’s name was, or whose family one belonged to.

In Marcos’s envisioned model of radical political change, the Philippines would only have as its leaders the best and the brightest. Power could only be conferred upon those who genuinely desired a life of service, and had the skilful capacity to realize this desire.

Marcos also recognized mass deception and misinformation as a grave ill that had befallen Philippine society. He claimed that the notion of freedom of speech had been abused by the richest of the rich, such that:

The media have become the weapon of a special class rather than serve as a public forum. . . . The control of media has perpetuated the simplistic politics that have been obstructive of meaningful change.

Because the media institutions were owned by the wealthy and powerful, Marcos accused the news of being permeated by their personal agendas. Thus, public perceptions of events were regularly manipulated to favor these special interests.

Marcos thus promised to end this “selective journalism”. In its place, aligned with his vision of a truly democratic Philippines, he endorsed an ideal of media practice that fulfilled its genuine goal of furnishing the Filipino people with the truth. Equipped with the truth, every Filipino citizen would be empowered to effectively participate in the affairs of the nation.

Finally, Marcos recognized that alongside these structural ills which afflicted the nation, everyday criminality was likewise rampant in society. Rates of murder, rape, and theft were unacceptably high, violating the basic expectation of Filipino citizens to live a life of safety and security. On the borders of Philippine territory, sovereignty over Sabah was being challenged by Malaysia, hinting at the tense possibility of war.

To address this, Marcos swore to relentlessly pursue measures to alleviate this daily violence and usher in an era of peace. To quell the international threat, Marcos promised to institute advancements for the Philippine military while negotiating a critical juncture for peace. To combat local threats, Marcos set forth plans for an exceptionally disciplined police force, capable of not just stopping crime, but preventing it by its sheer effectiveness.

Most important to Marcos, however, in his vision of a peaceful Philippines, was the individual contribution of every Filipino. This entailed the personal dedication and alignment of all to the Marcos vision of the New Society, encapsulated by the mantra “Sa ikauunlad ng bayan, disiplina ang kailangan.” In his media appearance formally announcing the declaration of Martial Law in September 23, 1972, Marcos vowed:

If you offend the New Society, you shall be punished like the rest of the offenders. People who have nothing whatsoever to do with such conspiracy and operations to overthrow the Republic of the Philippines by violence or subversion have nothing to fear.

In making these promises, Marcos was astute in not only identifying the ills which had long plagued Philippine society; he also laid down concrete, ambitious plans to solve them. Moreover, he recognized the role that every citizen played in building the nation. In his 1967 SONA, he describes nation-building as a great epic, saying:

Today, the great epic of national development is working itself out in terms of a thousand acts of courage and faith day after day among our countrymen, and the whole society is the theatre of action. Everyone sustains this great effort with his own acts of initiative and courage . . . The whole nation, thus, is involved; and everyone is involved according to the measure of his commitment to the future of his country.

In the beginning of Marcos’s rule, his was certainly a voice of hope and renewal. With his call for a brighter future for the Philippines, Marcos captured the hearts of millions of Filipinos as President of the Republic.

Now, given all these promises, we are called to ask as students of history: Throughout his 21 years in power, what did Marcos do in order to turn these dreams into reality? How many of his promises was he able to keep?


Declaration of Martial Law
On the night of September 23, 1972, Ferdinand Marcos spoke to the nation by television and by radio to make it known ...
Young Marcos
By seeing both the good and the bad in Marcos’s early life, sifting through facts and myths, it becomes possible to s...
Warning Signs: The Events Leading Up to Martial Law
We look back at events before the declaration of Martial Law in 1972 that, in retrospect, could have served as signs ...