The Night of the Declaration

On the night of September 23, 1972, Ferdinand Marcos spoke to the nation by television and by radio to make it known that he had declared Martial Law in the Philippines. 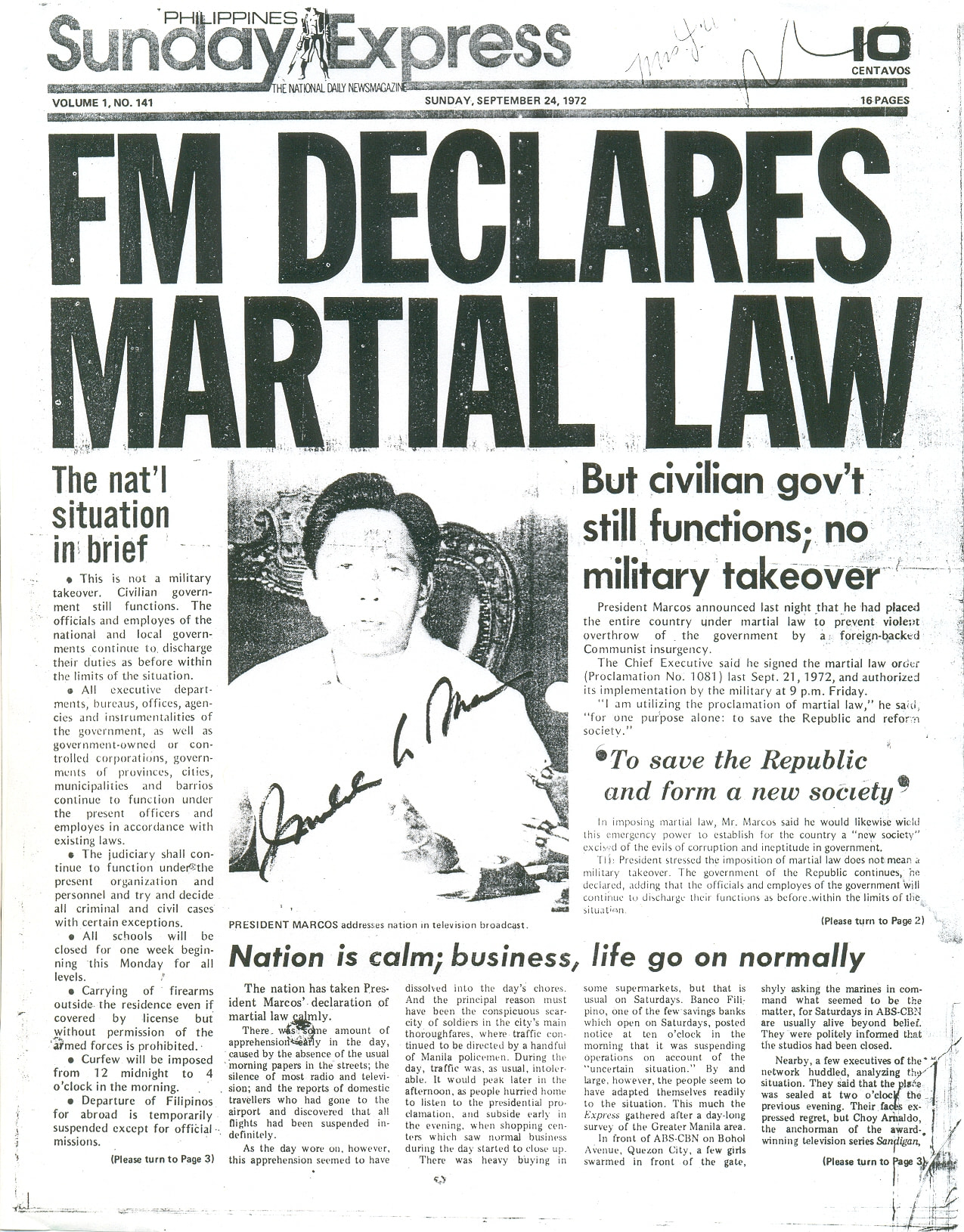 Proclamation no. 1081 eloquently described a state of lawlessness that had gripped the country and place the Filipino people in peril.

Specifically, Marcos cited a sizeable Communist force that had obtained weapons from China that sought to overthrow the government and violate the peaceful lives of ordinary Filipinos. Marcos even compared the current state of the nation to a war, one which he intended to put a stop to.

In response, Marcos declared that he would place the Philippines under a state of Martial Law, as according to the president’s powers described in the 1935 Philippine Constitution. Such powers included command over the Armed Forces of the Philippines to maintain law and order, as well as exclusive decision-making powers for whether or not a person would remain detained for any crime.

Furthermore, Marcos promised that he would use the special powers he was given in Martial Law to lead reforms that would lead the Philippines to prosperity and peace. Those who did not oppose his vision would live to see it come to fruition; on the other hand, those who dared to offend his rule would suffer just as any rebel would.

Though the announcement was made on September 23, the actual document had been signed September 21, 1972 due to a special superstition Marcos had about numbers.

When Marcos declared Martial Law in the Philippines, specific events that he cited to justify his decision were the Communist insurgency and the ambush of his Minister of Defense Juan Ponce Enrile outside the Wack-Wack subdivision. Both reasons, of course, fall within the scope of the imminent threat that necessitates the declaration of Martial Law.

However, independent reports suggest that at the time, there were only about 1,000 NPA guerrillas, whose arms were old-fashioned. In the NPA’s own history, only 350 men with first-line rifles were documented at the time of Martial Law. Other analyses suggest that it was in fact the declaration of Martial Law in 1972 which caused membership in these radicalized groups to swell. Reports on the increased following of the radical movement emphasize the role of idealistic youth, fed up with the abuses committed during the regime. Toward the end of Martial law, recorded numbers had grown from about 1,500 in 1976 to 35,000 in 1985.

On the other hand, the story of Juan Ponce Enrile’s ambush has also been called into question—by none other than Juan Ponce Enrile himself. In an interview after Marcos was ousted from power, Enrile admitted that the entire affair had been a hoax to steal power.

The original story claimed that Enrile had only escaped certain death because he happened to be riding his bodyguard’s car instead of his usual vehicle. In reality, given Enrile’s admission at the end of Marcos’s rule, it is more likely that the bullets riddling his car had been staged. Enrile had known about the plan the entire time. As Marcos’s former media man Primitivo Mijares tells it, the night of the incident, Marcos told Enrile over the phone:

“Make it look good. Kailangan siguro ay may masaktan o kung mayroon mapatay ay mas mabuti. O, hala, sige, Johnny, and be sure the story catches the Big News or Newswatch and call me as soon as it is over.”


Young Marcos
By seeing both the good and the bad in Marcos’s early life, sifting through facts and myths, it becomes possible to s...
Promises of the New Society
Marcos made many specific promises in order to achieve his dream of the New Society, a vision that represent a great ...
Martial Law 101
Declaring Martial Law is a power granted unto the President for cases when the people’s lives are being threatened an...