As many parts of the world remain in lockdown mode from the COVID-19 pandemic and as Catholics mark Holy Week, an almost forgotten event passed by without notice except for those who lived through it. Yet, this event is an important milestone in the history of martial law in the Philippines. For it had many firsts – the first major election of the martial law era; the first time we used the parliamentary system for the soon-to-be-opened legislature (matched by a new building in Quezon City) which Marcos abolished in 1972; and, the first and only that political forces of different persuasions worked together in an election.[1] We may also add that for a number of student activists, it was their first time to experience detention.

In January of 1978, Marcos called for an election scheduled for April 7 of that same year to fill the new legislative body called the Interim Batasang Pambansa (IBP). The election was partly to highlight the normalization process taking place in the country to the international community. Partly it was pressure from the Carter administration’s desire to return the country to the path of democratic rule. Jimmy Carter, the 39th US president, introduced human rights into US foreign policy objectives, a distant departure from the previous Republican presidents before and after his term. A motto among Washington policymakers at that time goes like this, “I don’t care if he is a `sonofabitch’ so long as he is our sonofabitch’!” As the Cold War rivalry turned into proxy wars in many parts of the world, the US-supported dictators who ruled with impunity and reckless abandon as they enjoyed full American support so long as they promote or preserve America’s interests.

Thus, Carter’s libertarian orientation reversed US foreign policy towards its authoritarian allies. In Asia, there were congressional hearings on widespread abuses made by the military in South Korea, Thailand, and the Philippines and how US aid abetted them. Likewise, a number of high-profile prisoners in the country were released. Thereafter, economic assistance and military aid were given only if recipient countries subscribed to a modicum of civil liberties and political reforms. It was in this context that the 1978 elections for members of the Interim Batasang Pambansa took shape.

At the outset, Sen. Jovito Salonga of the Liberal Party and other oppositionists did not believe that a fair and credible election would be possible under Marcos and instead opted for a boycott. Only former Senators Lorenzo Tanada, Francisco “Soc” Rodrigo, and the detained Benigno “Ninoy” Aquino took up the challenge.[2] The immediate task at hand was to form a political party and bring in oppositionists of various ideologies in so short. While Sen. Tanada could talk to the national democrats and Sen. Rodrigo with the social democrats, Ninoy brought in previous politicians.  Thus, was born the LABAN (Lakas ng Bayan] coalition, the opposition party in Metro Manila. 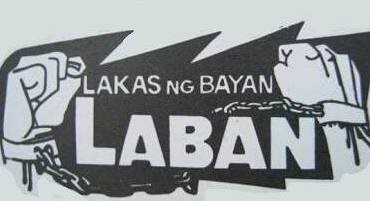 It was a David vs. Goliath struggle. Even if LABAN could not match the administration’s Kilusang Bagong Lipunan (KBL) party juggernaut in terms of resources and support, the election became a valued training exercise for organizing and conscientization especially the youth. After all, the election provided an opportunity to expose the systemic ills brought about by the Marcos regime and discuss this openly to the public. Many Ateneo students became actively involved in the campaign by printing and distributing election materials, organizing campaign meetings, doing house-to-house campaigns, training poll watchers, as well as acting as watchers themselves on the day of the election. A number wrote for LABAN’s periodical Malayang Pilipinas [Free Philippines].[3]

The climax of the campaign was the noise barrage in Metro Manila on April 6 the eve of the elections. As Sen. Nene Pimentel would later explain, the noise barrage was meant to demonstrate the people’s opposition to the regime even if their votes may not be counted. Catholic churches also participated by ringing its bells to signal the start of the protest. The organizers could not have anticipated its success as the boisterous expression of support for LABAN lasted well into the night. People banged pots and pans, sounded horns, and in some places put burned rubber tires. That the April 6, 1978 noise barrage was a spontaneous outburst of resentment and defiance did not escape Marcos’ attention.

Why LABAN lost all of its 21 candidates is often answered by the idea that Marcos would not tolerate any opposition to his rule. Perhaps. But the turnout in provincial areas, notably in Cebu, demonstrated that opposition candidates like Hilario Davide, Jr. and his teammates at the Pinaghuisa party were able to score victories. In a recently released memoir, Corazon C. Aquino recalled that the noise barrage of April 6, 1978, was so successful that the protest action shocked Marcos to the point that he ordered the COMELEC to shut out all the LABAN candidates in Metro Manila.[4]

For many, the result was a foregone conclusion.[5] But not a few wondered why even obscure KBL candidates were able to dislodge even the popular Ninoy Aquino. The cheating was so brazen that LABAN called for a protest march for April 9. Activists from the Ateneo de Manila joined 600 other protesters. They march was to gather at the Welcome Rotunda at the Quezon City-Manila boundary and march all the way to the COMELEC office in Intramuros. But before they could enter Manila, they were stopped by METROCOM troops of the then Philippine Constabulary. The protesters were then hauled on government-owned and operated Metro Manila buses and brought to Camp Bagong Diwa in Bicutan, Taguig 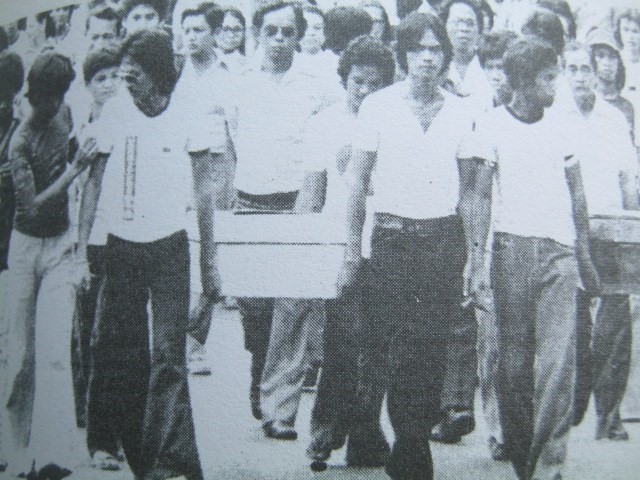 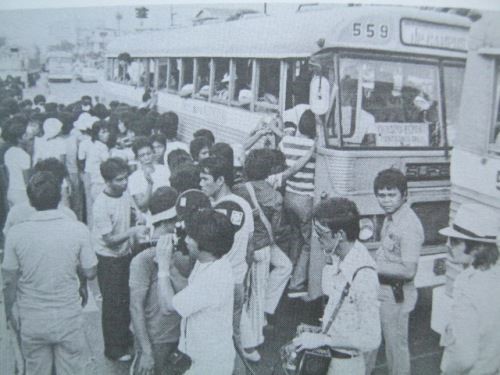 A defiant Sen. Lorenzo Tanada resisting his arrest and those of all the protesters while inside a police vehicle to be taken to Camp Bagong Diwa in Bicutan, Taguig. Photo taken from Aquilino Q. Pimentel’s book Martial Law in the Philippines: My Story, p.187

All demonstrators, from Senators Lorenzo Tanada and Soc Rodrigo, Tito Guingona, and Joker Arroyo down to the last member were charged with illegal assembly, illegal possession of deadly weapons, and subversive materials. Though scary and difficult at first, detention for the youth was made tolerable by the elders in the group as well as the “full-time residents” of Bagong Diwa who charged with graver offenses like rebellion. Accustomed to life in prison, they organized group games, singing sessions and other activities to while away the time. Students were also given tasks for the upkeep and maintenance of their living quarters. After a few days, Ateneo students were released through the intercession of University president Father Jose A. Cruz, S.J.[6] Students from other schools were likewise released on the same day. In the meantime, ring leaders like Nene Pimentel and Joker Arroyo would have to stay a little longer 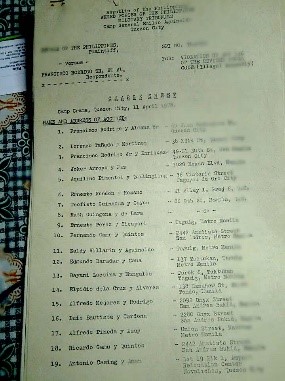 A copy of the charge sheet filed against the protesters. Photo from the SELDA Papers, Special Collections, UP Diliman Library. 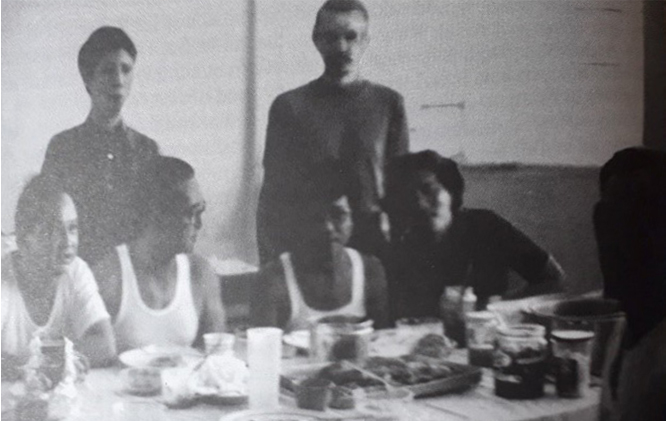 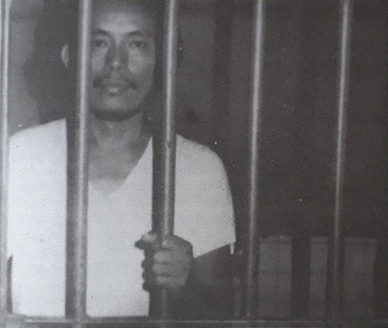 A young Nene Pimentel in jail for participating in the protest action of 9 April 1978. Photo taken from Aquilino Q. Pimentel’s book Martial Law in the Philippines: My Story, p.185

The eventful 1978 election had many repercussions. One is that it shattered the illusion that Marcos may still bargain with the opposition and offer concessions. This event made clear to everyone that elections as a means to effect political change is no longer feasible. From then on, oppositionists would try their hand on an armed struggle with the formation of the Light-A-Fire Movement and the April 6 Liberation Movement. Some linked up with the Moro National Liberation Front in search of training and hardware.

More importantly, the event solidified non-communist opposition to martial law. Because of an order from the CPP’s higher organ, the national democrats abandoned the campaign before election time came. As Sen. Salonga would later recall, this desertion so disappointed Ninoy Aquino that he ruled out cooperation with them in the future. Earning the ire of this group, the leaders of the Manila Rizal also faced sanctions from their organization. In the aftermath of this failed `adventurism’, the Committee was temporarily dissolved and its leaders sent to the countryside.[7]

The end of the Marcos regime did not happen only at EDSA in February 1986. Rather, it was a long series of struggles and sacrifices along the way that enabled us to oust the dictator and regained our freedom and democracy. The April 7, 1978 election was so much a part of it.


Quiz: How well do you know Marcos and Martial Law?
Test your knowledge on the Marcoses and Martial Law by identifying which of the statements are true!
Remembering the Heroes: Edgar Jopson
He was one of the most well-known figures of the student movement and remains a symbol for the idealistic Filipino yo...
Edifice Complex: Building on the Backs of the Filipino People
We hope to ask: as citizens, how can we appreciate the benefits of certain infrastructure projects, while remaining a...