Some argue that though abuses were indeed committed during Martial Law, life was good for those who did not try to fight the government. In fact, there are those who claim that the Marcos era was a Golden Age for the Philippines, characterized by booming infrastructure and a tiger economy.

In this exhibit, we examine the data from the 1960s to the end of the 1980s, with the goal of rigorously assessing the truth of these claims. No matter where one’s political sympathies lie, a look at the numbers can give us an objective idea of the status of the Philippine economy under Marcos, and the mark that his rule left on our country.

Poverty in the Philippines

One of the first indicators that may point to the economic impact of the Marcos era is the change in poverty levels after his administration. The following graph provides us with the percentage of poor families in the Philippines and by region, comparing data from 1965 (when Marcos first took office), 1971 (right before Marcos declared Martial Law), 1975 (in the middle of Martial Law), and 1985 (right before the EDSA Revolution). 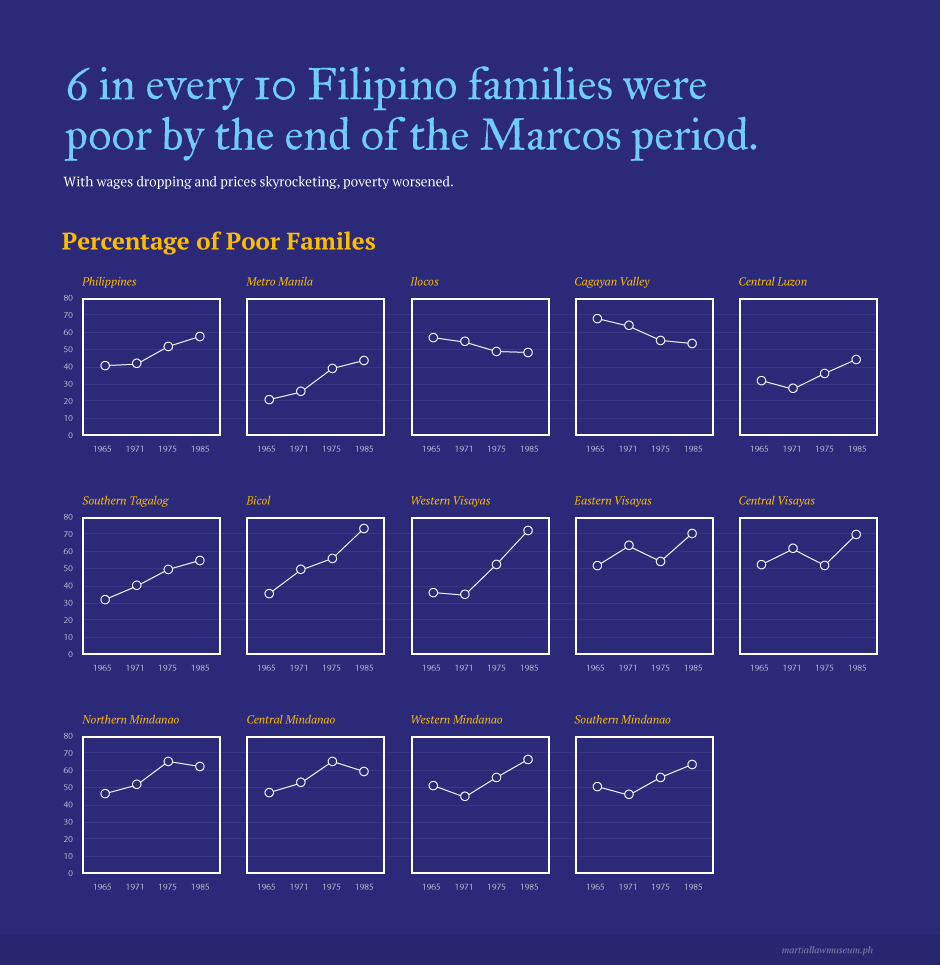 Moreover, as the graphs show, this is a consistent trend across the different regions of the nation, with some regions reaching as high a rate as 7 out of 10 families below the poverty line. Only two regions saw a marginal decrease in number of poor families: the Ilocos Region and Cagayan Valley.

A related indicator to poverty is the daily wage of workers. A daily wage is what a person earns in a day; on the other hand, a real wage is the value of the wage adjusted for inflation so that values are comparable across the years. By comparing a worker’s real wages before and after the Marcos era, we can get a better understanding of the status of the economy as felt by the ordinary Filipino.

The following graph shows the change in real wages of Filipino agricultural workers from 1962 to 1986. 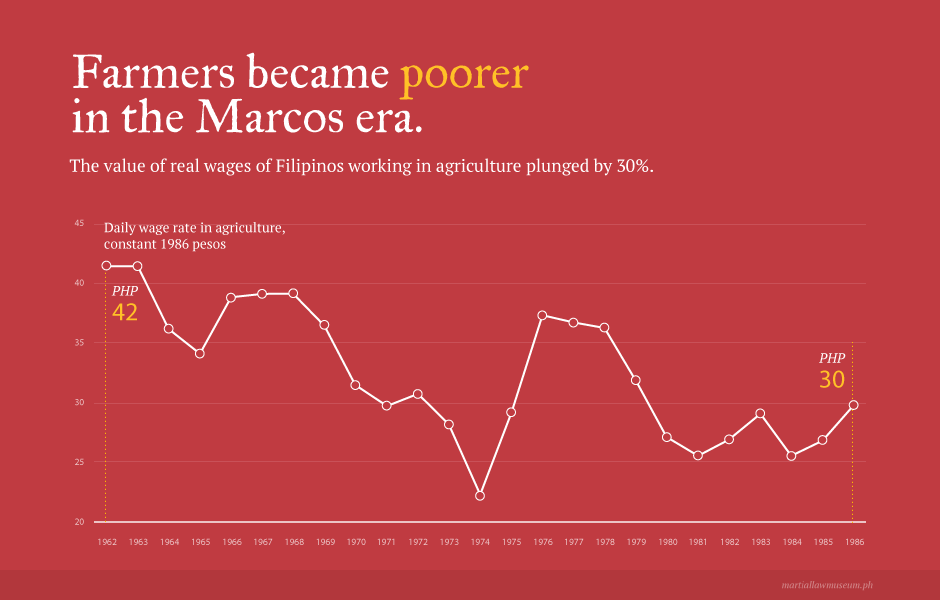 The data show that the daily wages of Filipino agricultural workers declined by about 30%, such that if a farmer earned Php 42 per day in 1972, he would only be earning about Php 30 in 1986. The wages of farmers even went as low as nearly half of the pre-Marcos values in 1974, right after the declaration of Martial Law. 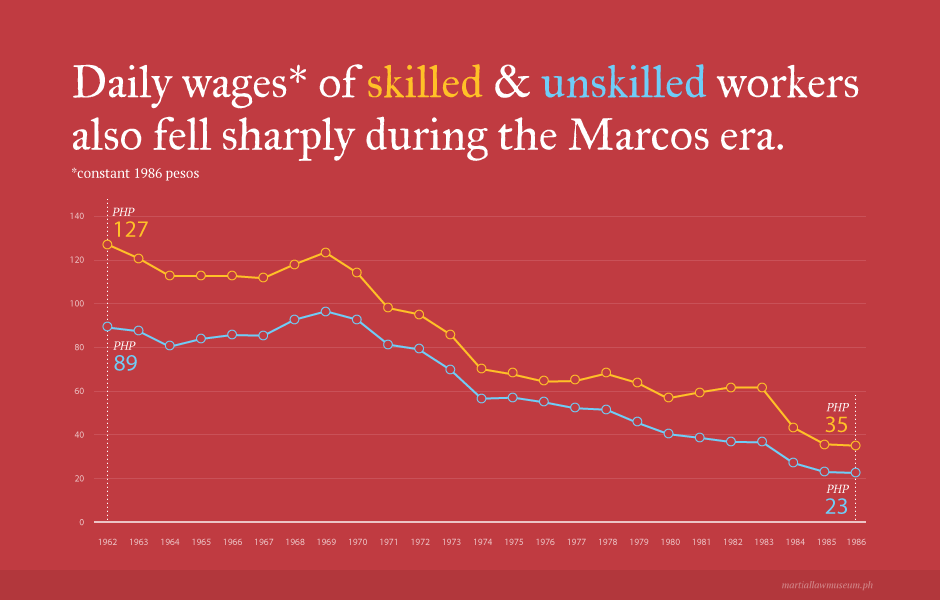 Another factor that provides us with a way to assess the alleged Golden Age is the price of basic goods. The graph below shows the change in consumer price index (CPI), as well as the prices of food and non-food items from 1962 to 1985. The CPI gives a measure of the prices of goods purchased by a typical consumer. 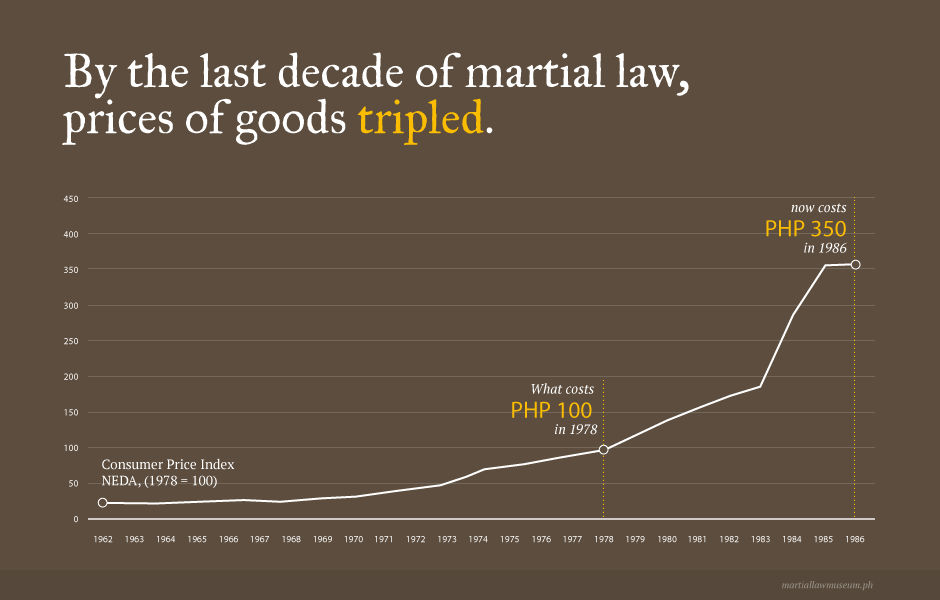 The graph above clearly shows a sharp increase in the prices of goods during the Marcos era. Especially by the last ten years, we can see that the prices of basic commodities tripled, such that what cost Php 100 in 1976 now cost more than Php 300—even nearing Php 400—in 1986.

In addition to factors relating to the domestic economy, another way of assessing the Marcos regime is through its impacts on the nation’s natural resources and the environment. The graph below specifically gives us an idea about how Marcos’s policies affected our country’s forest cover over the course of about 20 years. 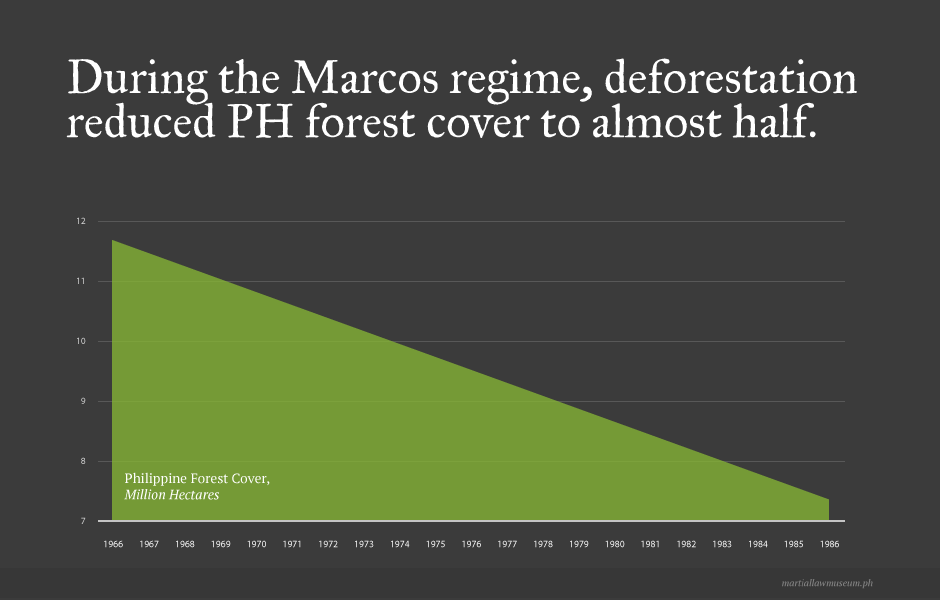 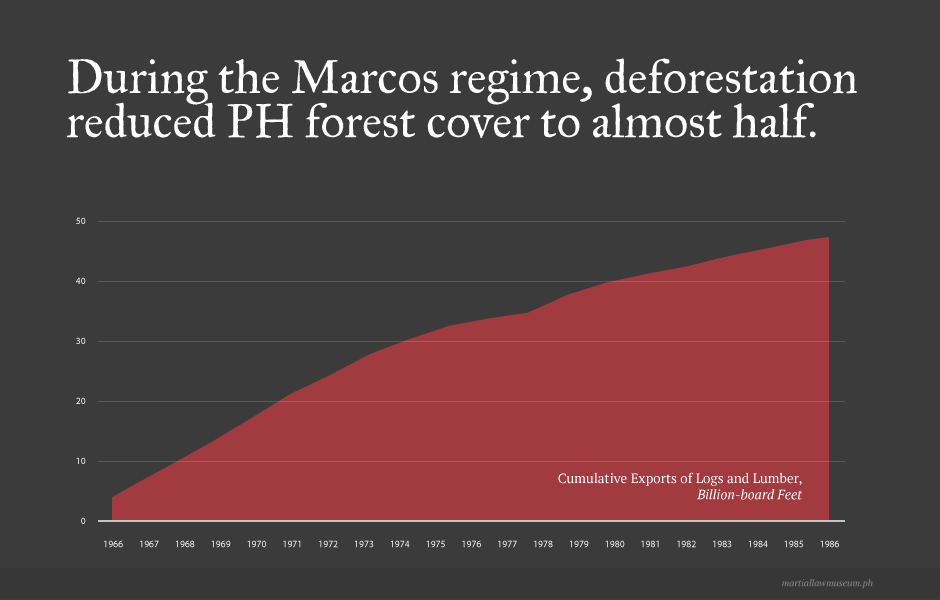 Supposedly, about 90% of the Philippines’ 18.7 million hectares of uplands, including more than 11 million hectares officially classified as timberlands, is publicly owned. In practice, fewer than 200 individuals controlled a large fraction of the country’s forests.

In pursuit of economic gains, Marcos and his cronies’ uncontrolled exportation of timber led to a drastic reduction in our forest cover. This cascades into dire environmental impacts including flooding, landslides, and even the worldwide phenomenon of global warming.

Finally, we assess the data on international debt, which shows us how much money we borrowed from other countries. 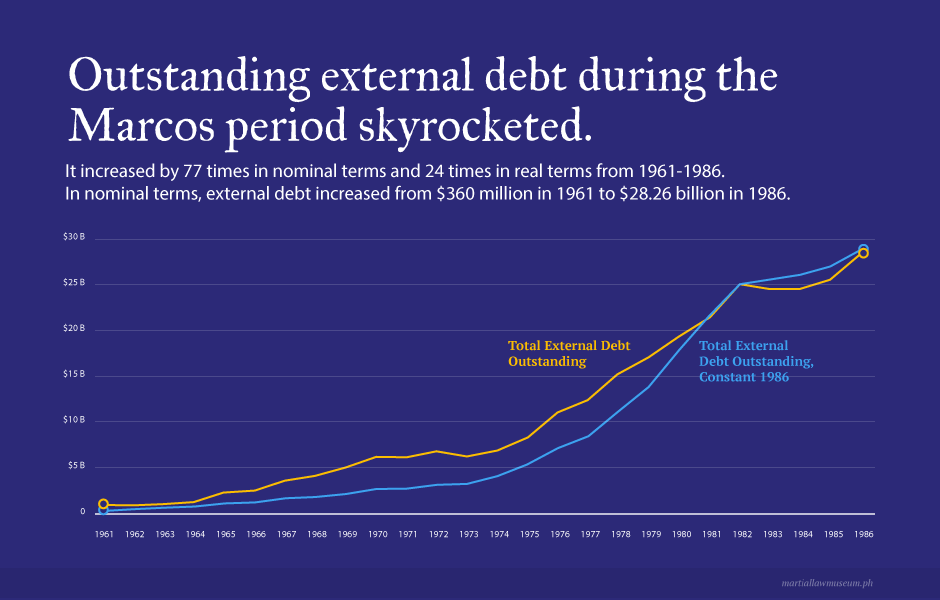 The whopping increase in our debts explains the growth, especially in infrastructure, primarily touted by some to assess the economic gains of the Marcos regime. But debt-driven growth is growth that sacrifices long-term benefits for short-term gratification, and ultimately leads to more burden than boon for the future generations that must pay these debts.

Considering how poverty increased, wages for workers decreased, and prices of goods increased significantly, one gets a clearer picture of the changes in lifestyle experienced by the ordinary Filipino. Progressively earning less while all around them, food and other basic needs were getting more and more expensive, one can imagine concretely the real economic impact that the supposed Golden Age had brought upon the nation.

Our assessment is exacerbated by an appraisal of the corresponding impacts the Marcos regime had both on the environment and our economic standing with other countries. Massive deforestation and accumulation of international debt plunged the nation’s resources into peril in more ways than one, leading to effects we continue to feel and pay for to this day.

So was the Marcos era truly a Golden Age? Different people may tell different stories, but the data tell only one.


Keeping Up with the Marcoses: Money, Fame and Fortune
One of the most striking features of the Marcos regime was not only the growing incidence of poverty in the nation, b...
The Heroes Who Fought Martial Law: Liliosa Hilao
At the age of 23, a student and a writer was the first reported case of a political prisoner’s death under Martial Law.
A Day in a Life of an Imeldic Shopaholic
Jewelries, antiques, clothes, chandeliers and a bullet-proof bra.