Martial Law in the New Constitution

In today’s 1987 Constitution, guarding against future attempts to replicate Marcos’s gambit for power, a President is bound by the following provisions in declaring Martial Law. 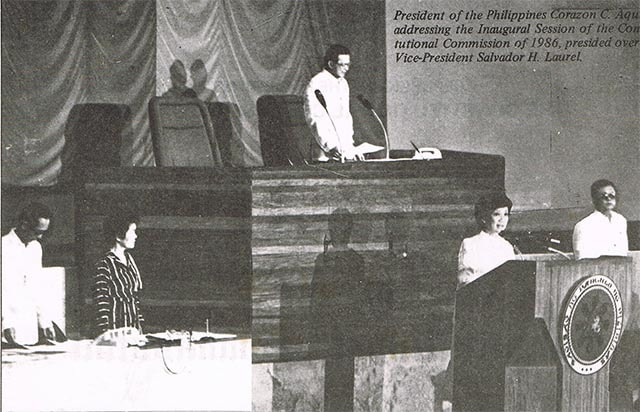 The inaugural session of the 1986 Constitutional Commission. Photo from the Official Gazette

As Commander-in-Chief, he may call out the armed forces of the Philippines in cases of lawless violence, invasion, and rebellion. In case of invasion and rebellion, martial law may be declared in the country or a part of it, and the writ of habeas corpus may be suspended.

Within forty-eight hours of the declaration, the President must submit a report to Congress. Congress must then vote jointly and decide by majority vote of all its members whether or not to revoke the President’s decision.

Upon the President’s initiative, Congress may also similarly extend the period of 60 days when necessary. The period of extension is determined by Congress.

Subject to filing by a citizen, the Supreme Court is also mandated to review whether there is sufficient factual basis to declare martial law. Within 30 days of filing, a decision must be promulgated.

All these measures ensure that the immense power of martial law cannot be abused by the President. With all these checks and balances, martial law can only be declared when there is sufficient factual basis to declare it, as competently reviewed by the Supreme Court. Moreover, additional specifics are laid out to protect citizens from abuse under the suspension of the writ of habeas corpus. Many of these additions reflect lessons directly learned from the period of Martial Law under Marcos.

The 1987 Constitution. The Official Gazette of the Philippines. Retrieved from http://www.officialgazette.gov.ph/constitutions/1987-constitution/


From Housewife to President: The Story of Cory Aquino
It was Cory’s victory that marked the end of Marcos’ rule, and for many, it also represented the triumph of democracy...
Road to Edsa
By 1986, the discontent and grief that had begun fermenting in the nation over an administration rife with violence a...
EDSA: An Unfinished Revolution
With the upheavals and social ills the nation has faced since 1986, some Filipinos may believe that EDSA has failed t...