On February 22-25, 1986, the Filipino people engaged in collective action so momentous that the entire world took notice. It has gone by many names: a bloodless revolution, the People Power Revolution, and most famously, the EDSA Revolution.

The name comes from the Epifanio delos Santos Avenue, where millions of Filipinos gathered together to peacefully express their rejection of the Marcos regime, and all its abuses over the past two decades. In the dictator Ferdinand’s place, the people rallied their support behind Corazon Aquino, widow of the late Senator Benigno “Ninoy” Aquino whose assassination three years prior had galvanized ordinary Filipinos into action. On EDSA, millions of Filipino citizens restored for themselves the democracy that had been hijacked the past two decades.

Over 30 years later, however, do Filipinos still believe in the power of EDSA? More importantly, do Filipinos presently enjoy the restoration of the democratic space won by the bloodless revolution? With the upheavals and social ills the nation has faced since 1986, some Filipinos may believe that EDSA has failed to fulfill its promises to the people. In this light, a label that has also been leveled at EDSA is an unfinished revolution.

But what does it mean for the EDSA Revolution to be unfinished? In this exhibit, we take a look at what it means for People Power to be a movement that did not stop with the end of the dictatorship—and indeed, it couldn’t have. Rather, the spirit and work of People Power continue up to today, an invitation for all of us to stand up to dictatorship in all its forms as engaged citizens and defenders of democracy in today’s Philippines.

Even if the Marcos administration was removed from Malacañang, the Marcoses themselves remain in a position of great dominance and wealth. Despite estimates of their stolen wealth amounting to about $10 billion, they have refused to openly admit to their theft, much less return the stolen billions to the nation’s coffers. Many of their assets remain secure in institutions abroad, in Swiss banks under false names, and in various properties in the Philippines and the United States.

In 1998, a court in Honolulu awarded about $1.9 billion in damages to the victims of human rights abuses including torture, summary executions, and disappearances during the Martial Law period. However, because of disputes over Marcos property, the first batch of claimants did not receive their compensation until more than ten years later. Until now, the Marcoses are not forthcoming with even this fraction of the ill-gotten wealth to those who suffered atrocities under the dictatorship. The same Hawaii court held Imelda Marcos and Bongbong Marcos in contempt for refusing to provide information about their resources, and even continuing to use frozen assets of their estate.

Bongbong has been quoted as saying:

There may have been abuses, but they were never a part of the policy of my father’s administration. Although there were individual abuses, I cannot see how his administration per se can be liable for that.

More than the natural red tape of legal and judicial processes, worse has been the impunity of the Marcoses themselves. The EDSA Revolution thus remains unfinished in the sense that not only have the former First Family remained unpunished for their crimes, but they have also exerted active efforts to erase them and deny the suffering of millions. The burial of the body of Ferdinand at the Libingan ng mga Bayani on November 18, 2016 demonstrates the urgency of the present task of safeguarding and building our collective national memory.

Even if at the end of EDSA the Marcoses fled Malacañang, their extensive network of cronies remained comfortably lodged in positions of wealth and power. The revolution did not knock on the door of every corrupt general, governor, and business tycoon in Marcos’s pocket. And indeed, in the years following the revolution, though the head of the Philippine political sphere had been replaced, many other aspects of society remained largely unmoved.

For example, many of the big corporations remained in the hands of those to whom Marcos distributed them. Because they were not the ones making the decrees, their brands of abuse were rarely as well-known as the dictator’s—and were likewise as difficult to bring to justice. The coco levy remains unresolved up to today, with Juan Ponce Enrile and Danding Cojuangco hardly even touched while coconut farmers remain disenfranchised and unable to claim what is rightfully theirs. Peace has still not been achieved in Mindanao.

As for our leaders, the dawn of the new millennium saw the presidency once again so virulently corrupted that a second People Power Revolution had to be held to depose Joseph Estrada, the only other Philippine head of state (ranked tenth) on the top ten list of most corrupt leaders in the world besides Marcos (ranked second). Estrada’s successor President Gloria Macapagal-Arroyo attempted to change the Constitution to extend her term of office, reminiscent of Marcos’s own strategy to cling to power. Extrajudicial killings and political incarceration have persisted in every administration since EDSA, most notably in the present administration with over 12,000 deaths within its first year.

In this light, one might say that the EDSA Revolution remains unfinished until now because more than specific personalities, the social ills which clawed at the lives of Filipinos during the Marcos administration likewise persist up to today: sometimes in different forms, often under different names. And it will certainly take some time before the ghosts of authoritarianism that persist in our flawed democracy are truly put to rest. 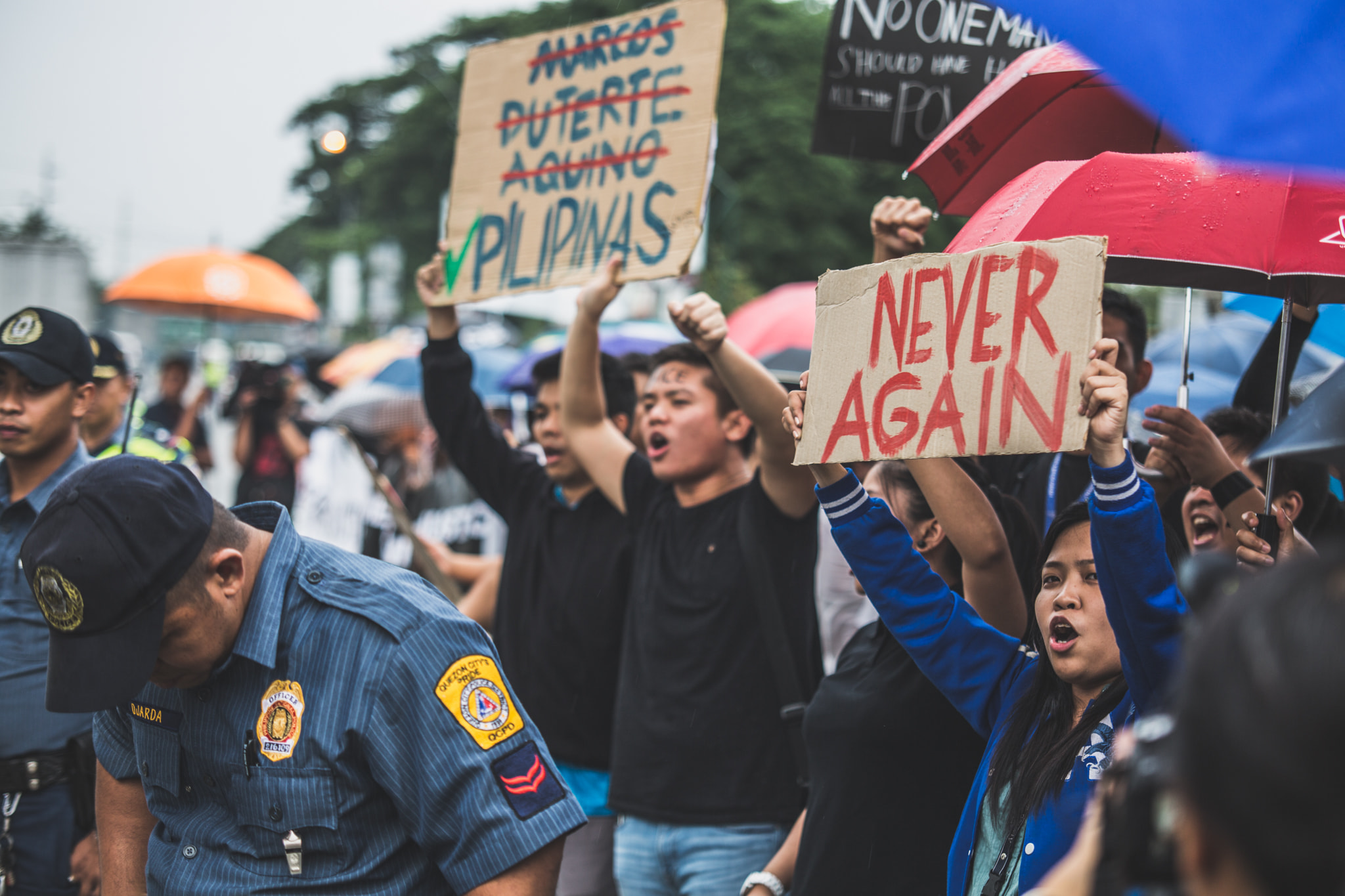 Regardless of ruler, a basic principle of democracy is that of pluralism. Pluralism admits to the validity of multiple voices in making decisions of governance and the exercise of power. Thus, fair elections are practiced so that the people may select leaders that genuinely represent and advocate their interests. Institutions are put in place to ensure that laws and their implementation defend and promote these interests for the good of every citizen, instead of the benefit of just a select few. Furthermore, checks and balances are present to keep abuses of power—ranging from corruption to the violation of human rights—from taking place.

What does democracy promise? It promises a space for the people of a nation to work together to build a better life for all. On the other hand, while in principle one-man rule should not in itself make development impossible, in practice throughout history dictatorships have resulted in massive theft, cronyism, political scapegoating, and the murder of innocents. Even if the promise of “efficiency” may sometimes make an authoritarian regime attractive to some, history teaches us that absolute power tends to corrupt absolutely—and indeed, such has been our experience and lesson in the Philippines.

In contrast, democracies necessarily take time to function. For instance, to implement any law, the government must undergo an active process of rigorous review—in exchange, rulers may not recklessly make decrees for their personal benefit or for the benefit of their political allies. Those accused of crimes are entitled to undergo due process, to be considered innocent unless proven guilty beyond reasonable doubt—in exchange, one’s parents, friends, and other loved ones may not simply disappear upon the slightest suspicion of the state.

Because of the EDSA Revolution, the space of democracy was finally recovered after two decades of Marcos rule. The road so far has been far from perfect, but the nation has made its gains. Democratic elections prevail to select the people’s leaders. Freedom of speech remains the norm, such that even criticism of the government is possible without threat to one’s life. The Philippine economy is recovering from the damage of the Marcos regime, and continues to grow rapidly. Through inclusive, equitable, and sustainable reforms, the nation ambitions to eradicate poverty by 2040.

EDSA was not meant to solve the nation’s problems, but to make it possible again for the people to do it together. And precisely because the role of EDSA has been to recover our democratic space as a nation, the revolution remains unfinished precisely because it continues up to the present with you. To engage our democracy and contribute to the building of our nation is the power that belongs to every Filipino citizen. So long as this power remains with the people, the People Power Revolution remains unfinished because it goes on with us all—a living, breathing revolution.


Road to Edsa
By 1986, the discontent and grief that had begun fermenting in the nation over an administration rife with violence a...
Martial Law in the New Constitution
In today’s 1987 Constitution, guarding against future attempts to replicate Marcos’s gambit for power, a President is...
The Hunt Continues: The PCGG and the Marcoses’ Ill-Gotten Wealth
Here is a timeline showing some of the efforts made by the Philippine government through the PCGG, as well as measure...