Edifice Complex: Building on the Backs of the Filipino People

The Marcos administration is best remembered for its contributions to the development of Philippine infrastructure. Under Marcos, an unprecedented number of buildings were constructed, varying from public health centers to cultural edifices. It is undeniable that Marcos played an integral role in the development of public infrastructure, with many of the roads and buildings constructed during his time still in use today.

However, Marcos’ achievements in public infrastructure did not come without a price. Many of Marcos’ projects were funded by foreign loans that left the Philippines with an outstanding debt of about $28.3 billion by 1986. These projects were also often the site for gross overspending, garishness, and corruption.

Here we present some of the buildings constructed during the Marcos administration and the often untold stories that accompanied their establishment. Through this exhibit, we hope to ask: as citizens, how can we appreciate the benefits of certain infrastructure projects, while remaining aware of the costs it took for them to be built? Can the same building tell a story of development and a story of corruption at the same time? 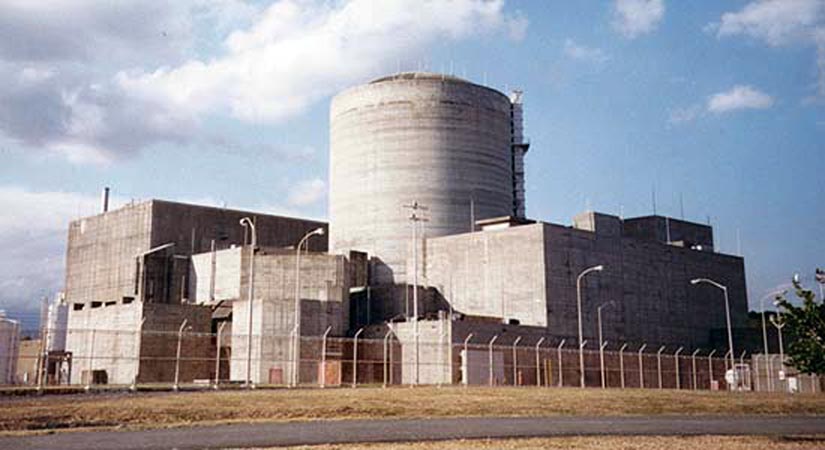 The Bataan Nuclear Power Plant (BNPP) was the Marcos administration’s solution to the oil crisis of 1973. The nuclear plant was estimated to save about 6 million barrels of crude oil a year and address the country’s numerous power shortages. As the National Power Corporation reports, the 623 MW electrical capacity of the BNPP could have met 10% of the power requirements of the Luzon grid. However, despite the plant’s promise of alternative energy, the construction of the BNPP was rife with controversy.

Bidding for the BNPP project was initially between two nuclear firms: General Electric (GE) and Westinghouse. After a year of extensive investigation of the Philippine situation, GE submitted a detailed proposal to build two 600-MW reactors for $700 million favored by the nuclear committee of the National Power Corporation. By comparison, Westinghouse’s proposal was made using only a pamphlet and a quoted price of $500 million for two reactors.

It was through connections with Marcos ally Herminio Disini that Westinghouse secured approval from Marcos to build the BNPP. Though Westinghouse’s initial quote was at $500 million for two reactors, the price later ballooned to $1.1 billion for only one reactor. As the National Computer Center reported, in comparison to similar plants in Taiwan and South Korea, the BNPP was overpriced by at least $75 million.

After the scare generated by the Three Mile Island nuclear meltdown of 1979, construction of the BNPP was halted by Marcos. Subsequent safety inspections deemed the BNPP unsafe. Moreover, independent studies found that the BNPP was within a 100-mile radius of 4 active volcanoes and 25 miles of three geologic faults.2 In later negotiations, Westinghouse agreed to make safety modifications amounting to $55 million on top of the plant’s initial cost.3

By January 1985, the BNPP was completed and cost an estimated total of $2.2 billion. A 1994 study reports that the cost of the BNPP alone represented around 8% of Philippine foreign debt.3 It took over thirty years for the government to fully pay the cost of the power plant’s construction.

Following Marcos’ removal from power, the first Aquino administration decided to shut down the plant in fear of another Chernobyl disaster. Nonetheless, Aquino also ordered for the maintenance and preservation of the plant until the government could decide what to do with the plant. Since then, the BNPP continues to see no use beyond serving as a tourist destination despite the PhP 50 million used in annual maintenance funds. 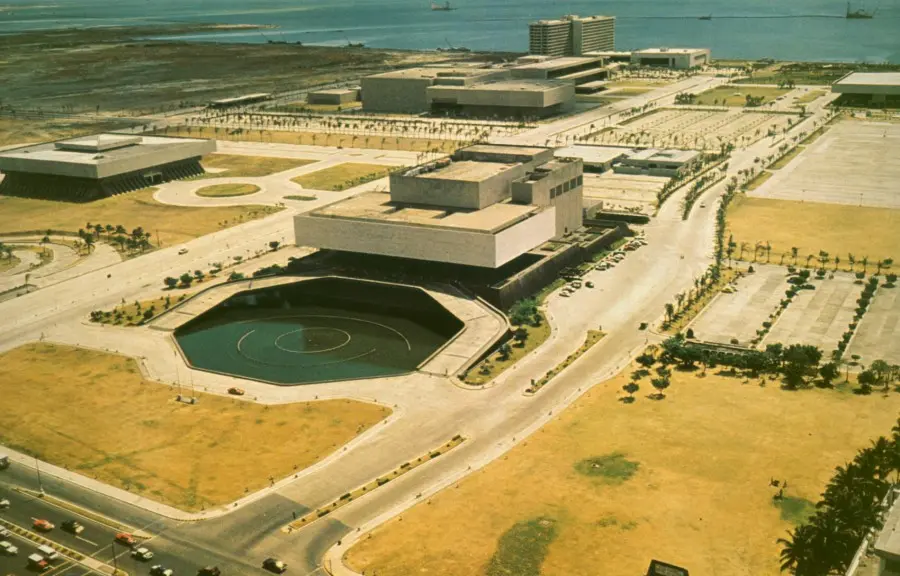 Image from the When in Manila article The Cultural Center of the Philippines, home of Filipino culture and arts

Cultural Center of the Philippines Complex

The development of the Cultural Center of the Philippines (CCP) complex resulted from the Marcos administration’s emphasis on nurturing Filipino culture and “the Filipino soul.” Designed under the guidance of architect Leandro Locsin, the complex was built on land reclaimed from Manila Bay. It became home to the artistic creations of numerous artists such as Hernando Ocampo, Fernando Zobel, Arturo Luz, Cesar Legaspi, and Vicente Manansala. 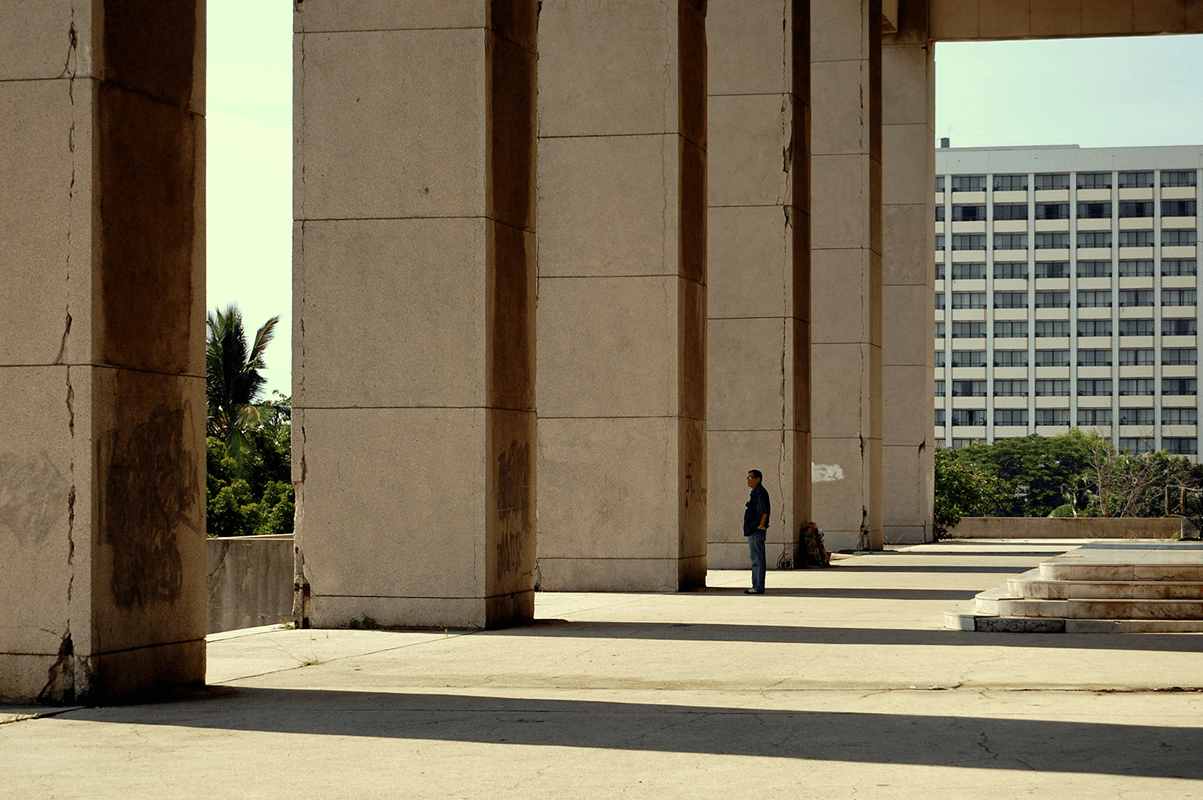 In hopes of turning Manila into Asia’s film capital and rival to Cannes, Imelda rushed to complete the Manila Film Center for the 1982 Manila International Film Festival (MIFF) on January 18, 1982. All in all, the Parthenon-inspired film center cost an estimated $25 million to build and took around 7,000 workers working round-the-clock shifts to meet Imelda’s deadline of three months.4 The film center was completed 15 minutes before its opening.

The Manila Film Center made international headlines, however, not for its magnificent structure, but for the tragedy that befell it. At around 3:00am on November 17, 1981, the roof of the film center collapsed and an alleged 169 workers were buried under the drying cement.4 Some were completely drowned in the rubble, while others were half-buried. All rescue attempts were delayed until an official statement could be made, and it took 9 hours before ambulances were permitted on site. Despite the scale of the accident, construction did not halt and many of the victims were left buried under the concrete to meet the film center’s tight deadlines.

While Imelda projected the film festival would draw 4,500 celebrities and gross $52 million, many film stars ignored her invitations. The tragedy also worsened the financial problems of the film center. The expenses for the opening night and later operating expenditures amounted to about $4 million, which would later be shouldered by the Central Bank. To compensate for this, the MIFF opened its doors to the screening of pornographic films, resulting in public outrage. 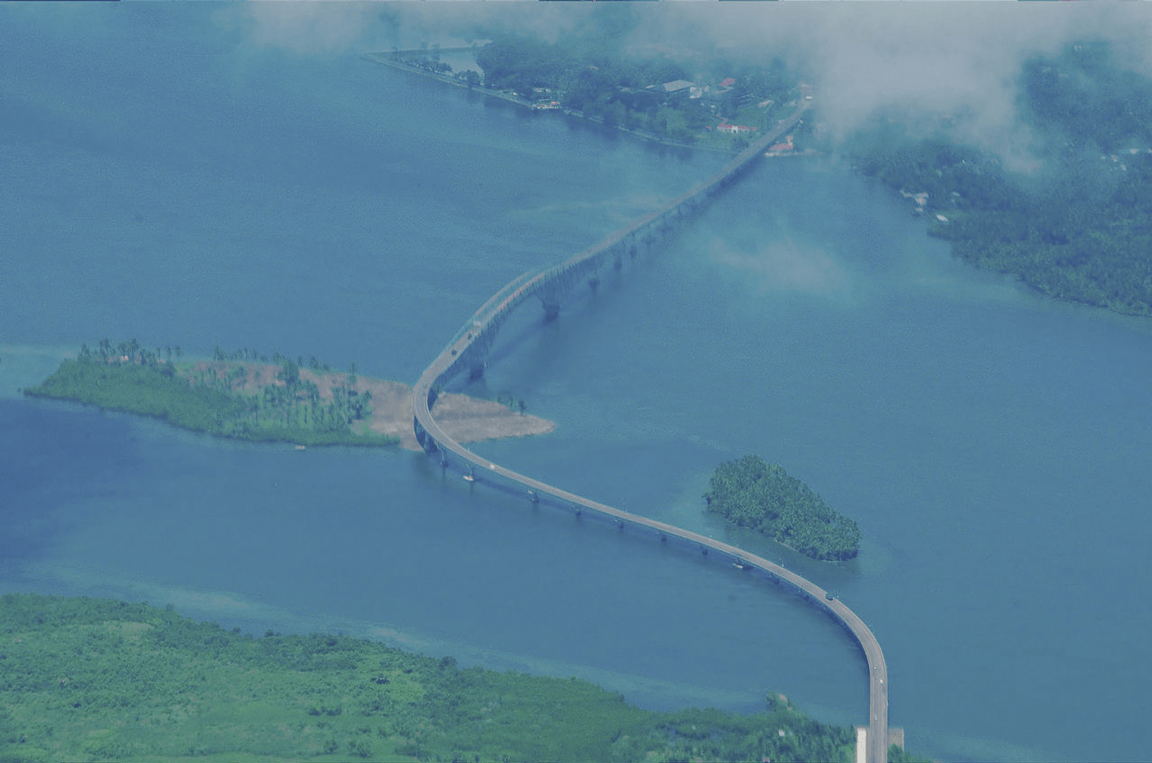 Perhaps one of the most iconic structures built under the Marcos regime is the San Juanico Bridge, also known as the Marcos bridge. Estimated to have cost about $21 million, the bridge measures approximately two kilometers long and connects the provinces of Samar and Leyte across the San Juanico strait. Its construction took only four years, beginning on August 1969 and ending December 1972. The bridge is also seen as a testimonial of love by the president as it is said to have been presented as a gift to first lady Imelda, a native of Leyte.

The same bridge, however, has also received criticism for being superfluous at the time it was built. As Ricardo Manapat writes, traffic between the two then underdeveloped islands was not yet enough to warrant the construction of the bridge, and for its cost, the bridge served little purpose beyond leisurely travel. As a commissioned project to the Construction and Development Corporation of the Philippines, the bridge had a budget that was bloated to benefit company owner and Marcos crony Rodolfo Cuenca. Moreover, while Ferdinand’s romantic gesture has also been publicized as part of its attraction to tourists, the integrity of using public funds for such a purpose has also been questioned.

Today, the San Juanico bridge forms a part of the identity of people in Samar and Leyte. A beautiful monument, it is an iconic tourist attraction that also contributes to the economic activity of the two provinces.

One of the biggest projects under the Marcos government was the $1 billion reclamation of Manila Bay in 1974 spearheaded also by the Rodolfo Cuenva’s CDCP. The project aimed to create a ten-kilometer highway to Cavite from reclaimed land that would address the problem of traffic jams and parking. It was subsequently known as the Manila-Cavite Coastal Road Reclamation Project (MCCRP) or “New City.”

Initially, the project’s goal was to add 1160 hectares of land to the city, but this was later increased to 2700 hectares and once more to 3000 hectares. As such, deadlines were continually revised with CDCP’s initial quote setting the project deadline to 1990 and later deferring it to 2004.

However, the CDCP faced numerous issues throughout the course of the project. Upon examination of the reclamation project, “technical defects” were found in the plans and subsequently had to be corrected which increased the cost of the project. Moreover, though the company had initially planned to finance the project by selling the reclaimed land, potential buyers showed little to no interest in the project, and the CDCP’s later appeals for funds, with the aid of the Marcos government were denied.

As a result, the CDCP had to depend on government support, with Development Bank of the Philippines (DBP) and the Philippine National Bank (PNB) funding 70% of the work, and other government agencies being persuaded to purchase reclaimed land to compensate for the project’s losses. 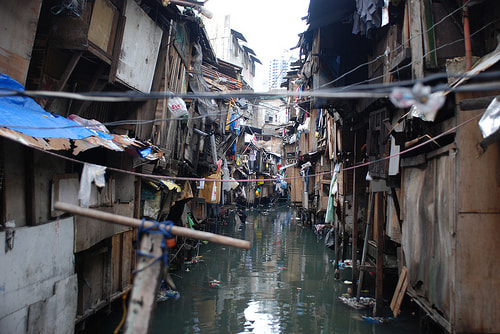 Imelda, then also acting as Governor of Metro Manila, was granted $32 million by the World Bank to rehabilitate the slums of Tondo under the project known as the Tondo Urban Renewal Project, which coincided with the International Monetary Fund (IMF)-World Bank Conference in Manila.

However, because it was too late to execute a complete urban renewal in time for the 1976 conference, Imelda ordered about 60 thousand families to be forcibly removed from the slum and its edges. Their houses were demolished to give the illusion of the project’s progress as families were carted off in garbage trucks to an isolated site outside Manila.

In comparison, Imelda rushed for the completion of convention facilities and exhibition halls for the conference delegates. This included the construction of the $65 million Philippine International Convention Center (PICC) and the Philippine Center for International Trade and Exhibition (PHILCITE). In preparation for the IMF-World Bank Conference, Imelda also ordered the construction of various luxury hotels, with fourteen hotels receiving foreign loans of about $500 million at the government’s recommendation. The amount spent on hotel financing was reportedly 30 to 40 times the amount the government spent on public housing.


From Senator to Prisoner: The Story of Ninoy Aquino
We look at the life of Ninoy Aquino and how his tale came to inspire many to challenge the dictatorial rule of the Ma...
Remembering the Heroes: Edgar Jopson
He was one of the most well-known figures of the student movement and remains a symbol for the idealistic Filipino yo...
Mga Datos Tungkol sa Martial Law
Importante tignan ang datos at mga numero para makita ang totoong kalagayanng ating ekonomiya as ilalim ni Marcos at ...