Lipunan is an educational role playing game (RPG) by Isa De Vera on martial law to be simulated in the classroom setting, with a facilitating history/social studies teacher, and at least six students. It would involve students taking on the personas of specific characters with roles relevant to the time period and setting–specifically, from Ferdinand Marcos’ first inauguration in 1965 to the EDSA People Power Revolution in 1986. The game is used as an enjoyable method supplemented to enrich the facilitating teacher’s lectures on martial law. 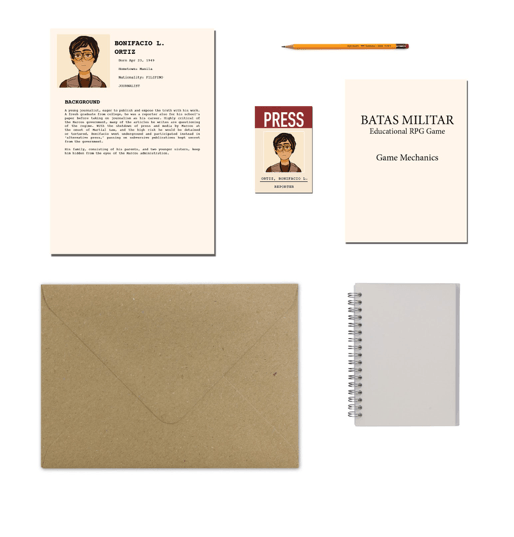 The goal of the game is to introduce the significance of different narratives working within the scope of martial law and the Marcos administration; the game also teaches beginning concepts of historiography, or the writing of history, to high school students. Rather than simply memorizing facts, names and dates from textbooks, students are able to recognize the importance of narrative building in the writing and study of history, as well as encouraging participation by rendering the learning experience more enjoyable.

Martial Law was a very significant period in Philippine History. Declared on September 22, 1972 by the then President Ferdinand Marcos, this would end up triggering a sequence of events that would alter the course of history as we knew it.
The educational role playing game Lipunan assumes students as key roles that would have certain parts to play in the events that occurred during martial law. The goal of the game is to teach students the different interweaving narratives surrounding the period through immersing themselves as players within a series of significant events, subsequently leading to the People’s Power Revolution in Febrauary of 1985. The game also draws attention to the process of writing history, as well as the impact and succeeding consequences of martial law on Philippine society today.
Download the Kit to view all the scenarios

Lipunan is an educational role-playing game. The teacher begins by assigning each student an individual character to play, each also receiving a special kit they will be using for the entire duration of the game. The kit contents (enclosed in an envelope) include: (1) character profile sheet, (1) game mechanics booklet, (1) writing journal, (1) pencil, and (1) special item, which differs per character role.

Three students may have the same type of character, and will be grouped with them to accomplish quests and sidequests assigned by the teacher throughout the game. Their character role will determine how the build their own narrative as the game progresses.

Some Character roles have specific abilities that can affect their character

Instead of the standard grading system, all players begin at level 0, with 0 EXP (experience points). Players then gain more experience points by accomplishing quests and sidequests, in the form of presentations, quizzes, submitting certain types of output, and by writing in their weekly journals. The total number of experience points would be then calculated and translated equivalently into school grades.

For students to gain experience points and level up, they need to accomplish quests and sidequests successfully. The following lists down the different kinds of quests and the assigned point system:
Main Quests
Side Quests

Players progress in the narrative mainly through journal entries. Journals are written in the perspective of their ‘characters’ and as such follow the flow of the timeline as each week progresses. What was your character doing during the Plaza Miranda Bombing? Players are free to control the actions of their characters, so long as it makes sense within the historical narrative.

This entails players to produce any kind of creative output regarding the topic or question given by the teacher. It ca be in the form of a drawing, a skit, a collage, or a performance.

Teachers are able to give extra credit assignments on their discretion, if they believe players are in need of them.
Download the Kit to view all the scenarios

There will be activities that each character role is to accomplish for each event. It can act as a basic lesson plan for teachers to use as a guide but can be adjusted if needed at the discretion of the teacher. All roles must submit an entry for their journals following the events of the timeline; extra output from certain roles will be listed below. Lectures per event from the teacher precede event activities by the students.
Download the Kit to view all the scenarios
About
MLM Awards
Facebook